The Money Coach Blog
May 01 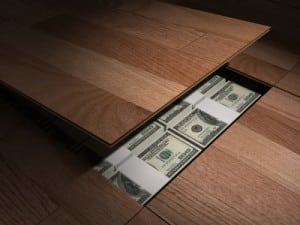 When to Hide Money From Your Spouse 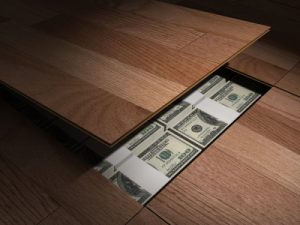 A slew of research tells us that Americans simply aren’t truthful with their spouses or partners when it comes to money matters.

In the latest poll, conducted by Today.com and SELF magazine, nearly half of individuals in the U.S. (46%) admit to hiding money from a spouse or to engaging in secret spending.

Financial experts, myself included, have long cautioned against such financial secrecy. After all, if you want honesty, open communication, and trust in a marriage, keeping money-related secrets is a fast way to ruin all of that.

Nevertheless, I’m going to buck conventional wisdom and suggest that there are a few times when you actually should hide money from your spouse.

Here are four circumstances in which it makes good sense – and indeed you’d be highly justified – in keeping your mate in the dark about those hard-earned dollars.

Scenario #1: You’re planning an escape from an abuser.

If you’re a battered spouse, you’re already dealing with a range of issues concerning dominance and control. You may also be living in fear of your life – and fearing for your children’s safety too.

We all know how hard it is for victims of domestic abuse to leave a controlling, abusive partner. So if you’ve actually summonsed the courage to do so, and are currently plotting your escape, you’d be wise to start squirreling away some money.

You’ll likely need cash for living expenses, food, transportation and more. So having a secret stash of money – even if it’s one that you build slowly over time – may not just be economically prudent, it could also prove to be the financial safety net that saves your life, by giving you the option to leave a violent spouse.

Even the government recognizes that abused people need to be dealt with using slightly different rules.

That’s why the Social Security Administration will go so far as to give a completely new Social Security number to someone who is fleeing domestic violence. Having money to escape – and a new identity and SSN – is vital under these dire circumstances.

Scenario #2: Divorce is imminent or inevitable.

If you want to get out of a bad marriage, or if you suspect your spouse is actively planning to serve you with divorce papers, you might want to start secretly stashing some cash. Unfortunately, even the most amicable of break-ups can turn ugly.

And if and when the gloves come off, you’re going to need a financial war chest to help pay lawyers, perhaps relocate, or simply to pay for new living quarters.

Depending on how nasty the divorce gets, you may also find yourself abruptly cut off from bank accounts or assets you previously freely accessed – so you need to be prepared.

In some states, especially community property states, you can get yourself into a world of trouble with judges and certain courts if you go buck wild, doing things like depleting your and your spouses savings accounts or maxing out the credit cards trying to get revenge.

If divorce really does appear to be inevitable, the smartest thing to do isn’t to try to hoard cash; it’s to start talking to a lawyer now who can help you map out the overall proper legal strategy to take.

If you’re very proactive about your finances, you may be the type who loves to pay your bills early or perhaps you started aggressively saving for retirement at age 27. But chances are you could be married to your financial opposite – a person who seems to put off doing everything when it comes to money matters.

Some of you women know the type: When your daughter was born, your husband said he’d open a savings account for her, but never did. After his brother had a sudden heart attack, your hubby promised he’d buy life insurance – just in case – but that never happened either.

And then there’s the way that your spouse has talked, f-o-r-e-v-e-r, about saving for retirement. Yet his 401(k) plan sits empty.

All this talk and no action probably drives you crazy – especially if there’s actually at least a little bit of cash lying around.

Your challenge, though, is to refrain from judging and to resist the urge to think you’re always right. Telling him “I told you so,” now that your daughter is 15 and you’ve got absolutely no money tucked away for her college tuition really isn’t going to solve anything. But it would be helpful to start saving on the side by yourself.

A few years from now, when you reveal those college funds – if nothing else to pay for textbooks, educational supplies and lab fees – your procrastinating spouse will probably thank you.

Scenario #4: Your spouse asked you to do it.

Let’s face it: some people are just bad with money, and can’t be trusted to manage it right – at least not now. They simply haven’t learned the art of fiscal management.

But the good news is that some of them actually recognize it. So count your financial blessings if you happened to have tied the knot with a person who essentially says: “Listen, I’m not good with money. I can’t save a dime. So you handle the finances and even keep some money stashed away that I don’t know about or can’t get to.”

Under such a scenario, you shouldn’t even feel guilty about squirreling away money.

Again, secret spending and hiding cash definitely isn’t something that I generally advocate.

But under extreme circumstances, like the ones described above, hiding money from your spouse may be in your best interest – and often their best interest too.