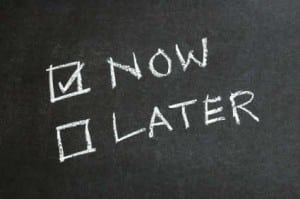 Making the Mental Decision to Pay Off Credit Card Debt 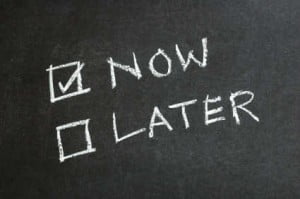 If you have cash in the bank, should you use it to pay off your credit card debt? The answer: absolutely.

Here’s the mental dilemma some of you are facing: it’s not that you can’t really afford to pay off your debt.

It’s just you can’t psychologically bear to part with that hard‑earned cash you’re sitting on.

Well, the truth is that you’re going to feel a lot better when you’re debt‑free.

What you’re really doing right now — and I hate to say it — is fooling yourself.

You’re mentally tricking yourself. You’re living an illusion. It’s making you feel comfortable but it’s really not grounded in reality.

By not acting, though, you’re making yourself feel better. You’re thinking, “I’ve got a little cash cushion in case there’s an emergency, or if something unexpected popped up.” That’s a smart strategy, actually.

If you’re in that little zone where you’re saying to yourself, “I’ve got the money to pay off my debt, but I don’t quite know if I should spend the cash on this debt,” here’s what you might try: pay off most of your debt.

Let’s say it is $5,000 that you have sitting in your savings account, or maybe a $5,000 windfall. Go ahead and pay off most of your credit card debt, if not all of it.

You should have some savings set aside for the unexpected, or for an emergency. Things happen. None of us can predict surprises. And emergency money is comforting.

But if you’re really thinking, “I’ve got the money, but I don’t want to part with it. I don’t want to write that check,” then stop procrastinating. Go ahead and pay off that debt.

You really will feel a lot better, and you’ll be living debt‑free.